Greaves At The Treble As Year 8’s Progress To Round 3!

On Thursday 10th February, the Year 8 Football Team booked their place in round 3 of the Devon Cup with a dominant 4-1 win over Cullompton Community College.

With early team news ruling out Jonah Shaw with a hamstring injury and Round 1 hero Harley Hooper through illness, PA knew that they would have to perform well without two key players to stand a chance of progression to Round 3.

Despite the pre-game setbacks, the team started the game strongly and went close in the early minutes with Sam Greaves and Logan Aston both testing the Cullompton keeper in the opening exchanges.

As the chances began to rack up for the home team, the Waterleat Road crowd were still having to wait for the opening goal due to some resolute Cullompton defending.

The breakthrough eventually came midway through the half, as a result of some excellent interplay from the Paignton boys.

After some efficient passing in the midfield area, the ball found its way to Jack Rowell in the number 10 position, and he played a beautiful through ball to the on-rushing Greaves who broke away from Cullompton defence and rounded the goalkeeper before calmly slotting into the unguarded net to give his team the lead.

The phrase “against the run of play” is a term commonly used in football to explain when a team has conceded a goal, despite long periods of dominance, and this expression could not have described the Cullompton equaliser any better.

As the away team constructed a rare forage into the Paignton half, the ball found its way to a green and black shirt around 25 yards from goal. With very little movement ahead, the Cullompton player hit a looping effort which viciously dipped over the despairing Ethan Crocker and nestled high into the net.

The big question for the Paignton team was how would they now react to the setback of conceding an equalising goal?

Their answer was to restore their lead almost immediately!

A pass from the defence into midfield created some space for the ever busy Ethan Radcliffe who cushioned the bouncing ball nicely before playing a pass over the top of the Cullompton defence for Greaves to run on to, and the inform striker did the rest by sliding the ball across the goalkeeper into the bottom left hand corner of the goal to make the score 2-1.

The score remained the same as the first half drew to a close, meaning that the home team would take a slender one goal lead into the interval despite an excellent first half.

The second half started in very similar fashion to the first, with the boys in blue continuing to push forward as they looked to gain full control of the cup tie.

As chances came and went, the importance of a third goal became more apparent as the team looked to ensure that they could keep their Exeter based opponents at arm’s length.

Thankfully, it was Paignton who had a striker in red hot form within their ranks as Sam Greaves proved his importance to the team once again with the game’s fourth goal.

At this point, Greaves had already been the beneficiary of some superb supply from his midfield teammates, and he had Rowell to thank again after the tricky talisman played a sensational reverse pass through the Cullompton defence to give him the opportunity to score his first hat trick for the academy, an opportunity which he took with both hands. 3-1!

With 10 minutes left in the game, the home team finally put the game to bed with arguably the goal of the game, as Logan Aston arrowed a shot from the edge of the area into the top corner of the Cullompton net to end the game as a contest.

There was still time for Paignton to go close on two more occasions before the close of play as they looked to increase their lead further.

The aforementioned Aston went first by smashing an upright trying to better his incredible previous effort, before Riley Osman fired into the side netting from a difficult angle. Despite these chances, the game ended with a very positive score line in favour of the Paignton boys.

As the team now awaits news of who they will play in Round 3, there is a huge sense of optimism and excitement to see what the rest of the competition holds.

Fantastic work from all boys involved. 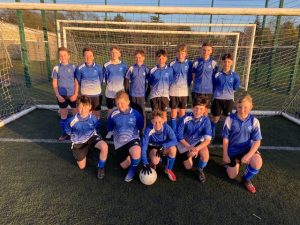