On Saturday 25th March, a travelling party of 44 Paignton Academy students and staff were in attendance as England overcame Switzerland in their latest international friendly at Wembley stadium.

The lack of weekend lie-in certainly didn’t dampen the spirit of the excited group of students as many arrived well ahead of the scheduled 8:45am meet time, ready for the long journey ahead.

A designated stop off at Membury Services provided a rare insight into the eating habits of the Paigntonian teenager, with Starbucks and Krispy Crème proving to be the main profiteers of the young people’s lavish spending.

The level of sugar consumed by the group seemed to resemble an extensive tour around Willy Wonka’s Chocolate Factory as the students scoffed their way to their North-West London destination.

Following their arrival at the “home of football” the group were allowed some time to explore the Wembley designer shopping outlet, and this prompted the purchase of a range of items varying from new trainers to training socks to bucket hats as the students seemed to further consolidate their position of the stereotypical English Football fan.

After a short but expensive venture around the Wembley Outlet Village, the time had come for the group to make their way up the famous Wembley escalators to their upper tier seats where they were to watch an exhilarating (hopefully) game of football take place.

After the first half was dominated by their Central European opponents, the home team could consider themselves fortunate to be on level terms at the break following a late goal from Manchester United full back Luke Shaw, as the teams went into the half time interval at 1-1.

The obligatory Mexican Waves were proving to be the main second half highlights, as our students joined in with the 70,000 strong crowd to help create an ever-entertaining spectacle, and this helped to keep the group entertained throughout what was a slow start to the second instalment of play by the home team.

As the home team huffed and puffed in their pursuit of a second half winner, the lack of quality in their final ball was proving frustrating to the England players and the large capacity crowd in attendance.

The travelling Paignton contingent were however treated to a late England winner as the ever-reliable England Captain, Harry Kane, earned his team a 2-1 victory following a well taken penalty, much to the delight of our pupils.

The excitement of seeing their England heroes secure a hard-fought win seemed to be a little too much for some of the group, who took full advantage of the reclining seats on the hire coach as they sought to catch up on some valuable “Zs” on the long journey home.

There was still time for one last stop on the way home as the students made their way into Reading Services to treat themselves to the culinary delights provided by the Burger King and KFC outlets available before jumping back on the coach for last part of a truly memorable day.

The 3:30am arrival home didn’t do too many of the students a favour with parents with Mothering Sunday now in full flow, but the experience of seeing their international idols in the flesh would surely act as a great consolation for a day of chores which they were sure to be undertaking.

All students were a pleasure to take away and were superb ambassadors for the PE Team and the Academy as a whole, and special thanks to Mr Coupe, Mr Clarke and Mr McCaskill for giving up their Saturdays to help facilitate the trip 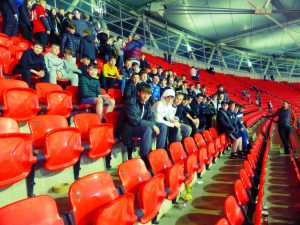 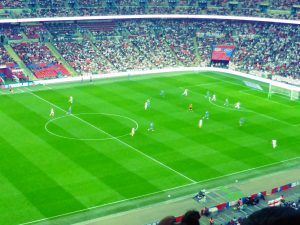