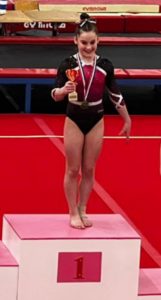 Abi Martin has been competing again in preparation for the British Championships, which take place in a couple of weeks. This has given Abi the opportunity to try out some big new skills, elevating her performances to an even higher level.
Last month, she travelled to Nottingham to compete in the Notts Open, which was an invitational competition. This was a great first competition back, where she was placed 1st on Floor, 2nd on vault and bars and 2nd overall.
The following week she was asked to represent a team for another club at the Rushmoor RoseBowl National Competition in Aldershot. Here,Abi was placed 6th overall in a massive group of 58 gymnasts of all ages, 13 and above. She helped the team finish 3rd and also placed 3rd on Bars.
Last weekend, Abi competed at the Devon Levels Championships in FIG Level (all ages from 12 upwards in the highest levels).Abi won and became the Devon FIG Level Champion, by placing 1st on Bars, vault & beam and 2nd on floor.
This recent journey, filled with success, has been great preparation for Abi who will be heading for the long awaited British Championships on 27th November.
Good luck Abi from everyone at Paignton Academy!